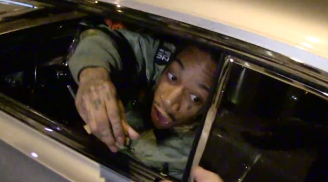 Wiz Khalifa was in a very generous mood with the razzi’s Friday night … handing out free weed to just because they were watching him.

When the paparazzi pulled up on him in West Hollywood while he was getting ready to roll some weed up an droll out, he was kind enough to share the wealth.

While answering questions he hands a hand full of weed to the paparazzi. Watch as he reaches in the bag and asks all the cameramen, “You want some?” before handing it out and explaining that it was his own strain.

For those not lucky enough to get a free sample straight out of Wiz’s bag, his Khalifa Kush strain of weed is available in dispensaries.